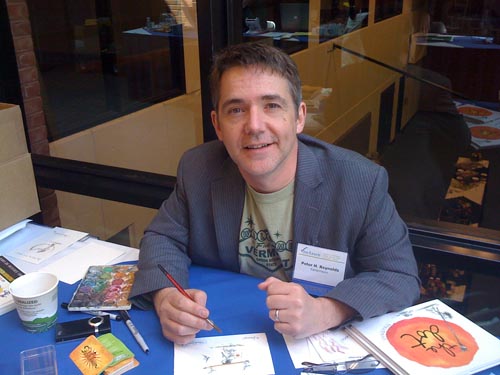 We wanted to kick off the New Year with Peter H. Reynolds because he believes that each of us has a powerful creative impulse. He says, “Even if you put you on hold for awhile, you can still get to know yourself and show that to the world.” He knows many kids who stopped making art in 4th or 5th grade who took it up again when given the chance. As he talks about The Dot and Ish, he makes a strong case never to give up—keep the creative juices flowing!

What comes first for you, the art or the words?

Usually, there’s a lightning bolt moment when the idea is formed. I’ll quickly write down a word or a few words to capture the idea and often I’ll put a little drawing next to it. It looks a lot like a book cover. I love the story of how The Dot began. I fell asleep with my pen to paper. When I woke up, the little dot I’d made had mushroomed into one giant black dot, and I wrote, “by Peter H. Reynolds.”

In Ish, Ramon mentions that he likes to draw with a “loose line.” Is drawing your favorite part? Or do you like the watercolor part just as much?

It’s all one process and I enjoy it all. I would say that the watercolor is the most free part for me. The equivalent would be if you’re baking a cake and then you get to frost it. The more relaxed I get, the better the art comes out. There’s actually very little color in both The Dot and Ish. There’s no color in their clothing or their faces. For me, less is more. I think black-and-white films are wonderful because your brain can do the painting for you.

Is it true that you used tea when you made the pictures in Ish and The Dot? The kind you drink?

Yes. I grew up in a British household and we drank a lot of tea. I have tea when I’m painting, and when I’m ready to start painting, sometimes I’m too eager to go and get water, so I use tea. It turns out that it adds a little bit of that sepia color.

We loved the “crumpled gallery” that Marisol makes of Ramon’s discarded drawings in Ish.

When I’ve done workshops with kids, I’ve seen them crumpling, tearing or erasing their drawings. It’s not a crisis if the picture doesn’t go the way your brain had envisioned. Put it to one side and grab another sheet of paper. That’s where the idea for Ish came from. A boy was drawing a tiger, and I thought, “What a beautiful image.” A few minutes later, I saw him erasing the tiger. I asked him about it, and he said, “Oh it was supposed to be a tiger, but it doesn’t look like one.” I said, “It’s Tiger-ish.” And his head whipped around and he said, “Tiger-ish?” The other kids wondered what we were talking about and came over, then they went back to their own work and said, “This is lion-ish,” “This is monkey-ish.”

We also liked the way Marisol’s comment that Ramon’s vase of flowers is “vase-ISH” helps him turn around his attitude toward his artwork.

Being a twin, I was born with someone who not only shared my DNA but also my experiences and values. Paul sees things from a different point of view, like Marisol did for Ramon. I think we need to allow people to take those first wobbly steps in an area that’s new to them. We’re not all going to be great at everything. If we were, we wouldn’t need each other. Communities thrive on differences in talent and abilities. That shouldn’t prevent you from dabbling in it yourself. The more we play sports, the better we’re going to be. The more we write, the better we get; the more we read, the more words we know. If you’re acting, reach inside and find your voice; don’t just find the words. It has to connect with you.

You have said that The Dot is the first in a “creatrilogy.” Is Ish the second? And what is the third?

Sky Color. I’ve just finished writing and illustrating it. The Dot is about getting brave and getting started. Ish is about finding your voice, and keep on keeping on. Sky Color is about how the learning journey never ends. There’s always a way to become more wonderful at whatever you do.

When you read The Dot and Ish together, it’s powerful if the adults who are reading with children to create art and sign it and proudly display it on the refrigerator or elsewhere. My hope is that parents and grandparents will splash along joyfully with their child or grandchild. Art is not a solo sport. You can create art together.