Skip to content
Facebook Twitter Instagram YouTube
Search
Close
The Circus Ship by Chris Van Dusen is based on a true story! In 1836, a ship called the Royal Tar carrying a lion, giraffe, tigers and other circus animals really did sink near the coast of Maine, where the author lives. Mr. Van Dusen gave the story a happier ending. The animals swim to shore, and when the tiger rescues Emma Rose from a fire, the islanders let the animals stay. But more adventures await them… 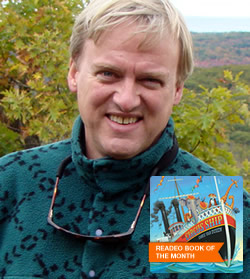 Where did you get the idea for The Circus Ship?
I first read the story of the Royal Tar about 20 years ago in Down East magazine here in Maine. It sank off the coast of Maine, near the island of Vinalhaven. I found it fascinating, and it cooked for a bunch of years until I found a new twist for the story, a happy twist.
We liked how the tiger was not afraid of fire because he jumped through flaming hoops in the circus.
The key to the story was the animals’ hidden talents. The tiger’s rescue of Emma Rose was the link that brought the whole story together. When I came up with that, I thought, “Now the story makes sense.”
Do you like to play with perspective? That scene where the circus ship crashes feels almost three-dimensional! And on the next page, it seems like we’re looking down from a helicopter.
I always try to do that in my books. I approach each illustration almost like a movie still. I try to think of the most exciting, unique, interesting way to present the scene.
Are all 15 animals hiding in the picture when the circus boss, Mr. Paine, comes to the island to collect the animals? I couldn’t find them all!
Yes! All 15 are in the picture. When I talk to families, I discovered that kids can find them very quickly. But parents have more trouble. I wanted some animals to be easy to find, and some to be hard. I bet you didn’t find the cheetah or the alligator.
No, I didn’t!
That spread took the longest to paint. It took me about a month to finish. Usually each illustration takes me one to two weeks. I didn’t think that one was ever going to end.
Is it different when you are illustrating your own story versus the Mercy Watson books, where you have the story by Kate DiCamillo?
It does feel like a different process. When I’m illustrating my own story, I think of how I want the book to look even before I write any of the words. In the case of The Circus Ship, I wanted to capture that feeling of Maine island life in the 1830s. When I’m illustrating someone else’s story, I’m presented with the words, and I embellish them with illustrations. The Mercy Watson books were really fun though, because Kate DiCamillo gave me full range to create these characters. She’d write, “Eugenia is really old and really thin.” And that’s about it. So I got to create the look of the character. It was almost like casting a movie.