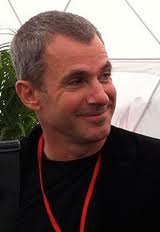 Mister Bud is the beloved pet at the center of his household—until Zorro arrives, and the two must learn to get along. When you read Say Hello to Zorro! it’s hard to believe that author and artist Carter Goodrich owns no dog. He does, however, spend a lot of time with dogs, and he gets all the details right about how they spend their days: eating, walking and sleeping. We talked with him about his canine characters and his inspiration for them. Read the interview and then log in to read or BookChat with our July Book of the Month!

What gave you the idea for two dueling pups that ultimately become friends?
One of my brothers is the Pied Piper of dogs. He had a dog named Gus, a runaway that he rescued. I was driving around with my brother in his truck, and Gus was there, too. Gus saw a dog, leaned out the window and started barking. The other dog barked back. My brother translated: “What the heck are you looking at?” “You wouldn’t be so tough if you weren’t in that truck.” That’s when the light bulb went off.

We liked the way you set out Mister Bud’s schedule and built the story around it. One of our favorites is “Dinnertime.”
The dogs run the household. That scene of Mister Bud watching his dish–I’ve seen that many times. A lot of people respond to that one.

We liked how Zorro’s arrival upsets Mister Bud—until he discovers they have the same schedule.
There’s an honesty about dogs. They can’t lie. It’s all out there. I think that’s why people like them so much. It’s not all rosy, but Mister Bud and Zorro accept each other and learn how to cohabitate. There’s a lot we can learn from dogs.

Did you have fun imagining their conversations?
There’s no small talk with dogs. Just the essentials. If they do speak to each other, it’s only at a point when they’d normally growl or bark. They don’t do that often. It has to be a situation where that’s happening or could happen in life. It’s a bit of a mix of reality and fantasy. I try to stay true to that.

You have worked on covers for the New Yorker magazine and also on films before coming to children’s books. Would you say that one was more helpful than the other, in terms of creating a story in 32 pages?
I think doing any of that kind of image-making is just like movies. Every picture tells a story. If you’re not telling a story–even in just a single image–then nothing is really happening. I think that’s why I’ve met some success in character design for the movies. In a sketch, if there’s something in that character that people respond to, then it will succeed. A lot of stuff goes into the round file [trash]. It might even be a pretty good drawing or design. But if it doesn’t have that extra something to it, it doesn’t rate.

I’d love to see Mister Bud and Zorro on the big screen.
That’s tricky. If something arrives as a book, everyone makes their own movie [in their heads]. You have to make the movie so well that you don’t disturb that. One of the best movies ever made is that half-hour A Charlie Brown Christmas. It’s so simple and so perfect. That’s a great example of something that couldn’t have messed up anyone’s interior movie of that strip. Hold that up against, say, The Polar Express. Here you took Van Allsburg’s beautiful story, and you stretched it out to this feature-length film. The trick is boiling it down.

How did you create the illustrations?
I just used watercolor in these, and that’s new for me, and hard to do. I’ve always used pencils to flesh out the piece or correct the paintings and enrich the whole thing. But I thought when I started Zorro, these stories are really simple and have to be told as vignettes. I wanted it to be character-driven, and a step or two beyond sketches.

The best part of an image is the part I couldn’t control, the happy accident. When something strange would happen in a piece, it would always be better than something I might purposefully do. Like when Zorro is shifting position on the couch. I did a lot of takes on that. I was still working with pencil and trying to shape it and tone it. I thought, “I have to paint the couch really quickly, and it’s either going to hit or not.” There are little things where the paint did everything on its own,. But then I had to repeat it. And that was alright, too. It wasn’t as hard as I thought it would be.

What’s next for Mister Bud and Zorro?
Zorro is based loosely on my aunt’s pug named Ozzie. I have dyslexia, so I called him Zorro. The Os and Zs I get all mixed up. Every now and then she’ll give Ozzie an outfit and I always feel sorry for him. He always puts up with it, but you can tell he doesn’t like it. It’s slightly crooked. He’s just enduring it. The next story is about that. Mister Bud is kind of neutral but doesn’t want his new pal to be upset. They have an adventure in the park and it all works out in the end.

Go to our Facebook page for information on how you can win your own copy of Say Hello to Zorro!

Jenny Brown is the editor for Readeo and oversees all book selection for the site. She has worked in the children’s book world for the past 25 years, holding positions with HarperCollins and Scholastic, and was the Children’s Books Reviews Editor for Publishers Weekly.  She currently writes for School Library Journal, Kirkus Reviews, and Shelf Awareness. Jenny graduated from Princeton University. You can read more from Jenny on her Web site, Twenty by Jenny.