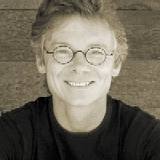 Ever since he published his first book, Stanley Goes for a Drive, it was clear that Craig Frazier saw things a little differently.  As a farmer named Stanley milks a cow, the cow’s white spots drain away. And when Stanley throws his bucket of milk into the air, the milk turns to clouds. In his most recent book, Lots of Dots, he shows us how many dots we see every day and may not even notice. Here Craig Frazier discusses his “mission” to help us view the world with fresh eyes.

What gave you the idea to write a book about the many dots in our world?
It literally came out of my sketchbook. I kept trying to do a silhouette of a man with little sticky dots that you pull off of a sheet. Then I started to look at the pictures and thought, “Where do dots appear?” Then I thought, “Can I take this theme and make it last for 36 pages?”

Did you make a list of all the dots you found and then narrow them down to your favorites? Or did you look for rhyming ideas?
It’s a combination of the two of those. Instantly there are visual things that I see. Then I got to a place where I said, “Okay where is the rhyme? What’s happening on the page? What’s the connection left to right? Some dots are small, some are big. How would those marry together?” It’s kind of a rubric’s cube. You push things around until they have a visual rhythm as well as a written rhythm.

We liked the way some dots are frivolous and fun (“dots for licking” on an ice cream cone) and others are profound, such as the star-filled “some dots are bright.” Did you go for variety, too?
That star-filled spread is wonderful because it’s a break in the rhythm, both in terms of scale and tone. With a book like this, there’s no story. You can’t be boring. It’s a lot about that surprise when you turn the page. “Some dots are heavy,” with the big dumbbell, came about as a drawing first. I thought, “I have to have that in there.” The dog is totally different. He’s alone. That’s the only spread without the man.

Do you put a lot of thought into the colors you choose?
At one point I had the man all in the same color. I decided to inject a little more fun in the book [and change his color]. Then I had to look and make sure I didn’t have two green ones in a row, or two red ones. When you start to put it together, you make decisions based on what’s on the page before and what’s on the page after.

Stanley Goes for a Drive was your first children’s book, wasn’t it? What made you want to do books for children?
Stanley came out of an animation I’d done. (You can see it here.) I had created animation because people asked me if I’d considered doing animation. So I came up with this story about driving out to a field in a pick-up truck, and milking the cows and putting the milk in the sky. Stanley’s got a problem in every one of the books and he solves it in an unconventional way. It’s possible that as you milk the cow, its spots go away, and you could put milk into the sky. I remember the first time I read Stanley Goes for a Drive, the kids said, “Of course.” Their discussion was, “How do we make chocolate milk?” My hidden agenda is to teach people to see things in a different way. It’s all about making associations and thinking there are infinite possibilities. Whether it can happen or not is not the point, it’s about believing it could happen.

Jenny Brown is the editor for Readeo and oversees all book selection for the site. She has worked in the children’s book world for the past 25 years, holding positions with HarperCollins and Scholastic, and was the Children’s Books Reviews Editor for Publisher’s Weekly.  She currently writes for School Library Journal, Kirkus Reviews, and Shelf Awareness. Jenny graduated from Princeton University. You can read more from Jenny on her Web site, Twenty by Jenny.